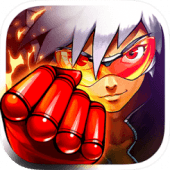 The average rating is 4.28 out of 5 stars on playstore.
If you want to know more about Infinite Combo then you may visit Black Pearl Games Limited support center for more information

All the apps & games here are for home or personal use only. If any apk download infringes your copyright,
please contact us. Infinite Combo is the property and trademark from the developer Black Pearl Games Limited.

With “Launcher”, “Aerial”, “Knockback”, “Knockdown” skills, every hero can launch into unique combos.

Combined with the distinctive “Pro-I Animation Engine”, battles now look flashier and more fluid than ever.

Recruit and train heroes from different time periods and cultures in the sophisticated Hero Advancement System.

Build your own combos and defeat enemies in challenging stages.

Mix and match to create your unique team of heroes and dominate every dimension!

**** No more paper dolls with the True Combo system! ****
The first game with a fighting-game style combo system in a round-based battle.
Launch enemies into the air, unleash air combos, knock them back or down all in one fluid, seamless system.

**** Out with mindless button-mashing, in with intelligent team-building! ****
With more than 1,000 heroes, 6,000 skills and 30,000 possible combos, it’s up to the players to make the most out of the game and build their all-star teams to become the champion!

**** With combos, interrupts, enchantments, mirror images, summons, and transformations, battles are anything but boring! ****
Heroes are not one-trick ponies.
From the starting combo, they are able to cast enchantments, interrupt enemy skills, summon mirror images and beastly helpers to light up the battlefield!

**** PvP Mode – where only the strong survives ****
Real time battles – claim the throne via leaderboard matches, or dominate the server in guild battles.
The best player needs the most challenging stage to display his/her prowess.
Play smart, get your friends to help, because only the strong will survive!

How to Play Infinite Combo on PC,Laptop,Windows