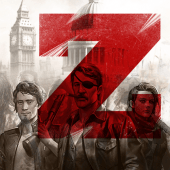 The average rating is 4.20 out of 5 stars on playstore.
If you want to know more about Last Empire – War Z: Strategy then you may visit im30.net support center for more information

All the apps & games here are for home or personal use only. If any apk download infringes your copyright,
please contact us. Last Empire – War Z: Strategy is the property and trademark from the developer im30.net.

This is a dangerous world with walking dead and countless toxic creatures. The dark times has come, train your soldiers, find alliance and forge the weapons to protect your homeland. Only the ones with courage and wisdom would survive.

Last Empire-War Z is a fresh new zombie theme strategy game, join us and play with global players, meet the loyal alliance or enemy from the other side of the world. You’ll need to fight the brutal battle and try your best to produce and protect resource to support your troops. Unite your allies or play solo, it\’s up to you! Die or Die trying is your choice!

Game Features
☆ Free to play real time strategy game.
☆You can view the battles in real time and in various regions around the world, chat and find your alliance worldwide
☆ Train your troops and your hero, develop your city, create the most powerful anti-zombie army.
☆ Attack and Kill the Zombies. Strategies can be changing all the time and you will become a real war commander.
☆ There are countless zombie and dark creatures gives you the thrill experience of zombie massacre.
☆ You can be a hero, a villain, an ambassador of peace, or someone else\’s resource provider. it’s all up to you.
☆ Come join us and survive the end of the world.

How to Play Last Empire – War Z: Strategy on PC,Laptop,Windows