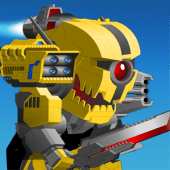 The average rating is 4.30 out of 5 stars on playstore.
If you want to know more about Super Mechs then you may visit Tacticsoft support center for more information

All the apps & games here are for home or personal use only. If any apk download infringes your copyright,
please contact us. Super Mechs is the property and trademark from the developer Tacticsoft.

Join the ULTIMATE BATTLE for Domination!
Jump into your Mech, and fight in the arena for Glory!
Play for Free in the most addicting & interactive action strategy PvP MMO.

SUPER MECHS is a unique turn-based action/strategy battle arena, where you jump into the pilot seat of a mighty Mech and destroy foes as you progress in either a story mode or in online PvP.
You can customize your Mech completely, selecting which hull, weapons, armor and equipment to use in order to defeat the challenges ahead.
Progress up the ladder in solo play, or be a part of an alliance and play in the weekly league for unique rewards and legendary items.

Just remember – it takes everything you have to be best. Can you be the Super Mech?

Features:
– Build and customize your Mech, from thousands of available variations
– Join thousands of players from all around the world in a PvP arena to decide who has the strongest Mech
– Craft weapons, armor and upgrades and embed them with unique Power-Ups
– Equip your Mech with Legendary gear and dominate the leaderboard
– Play & Chat in real-time
– Join an alliance of warriors – or start your own!
– Co-op with other alliance members & become the best Mech in the world
– Challenge friends and strangers in turn-based online play
– Engaging single player story mode

So jump right in, pilot. Your Mech is waiting – it’s time to BATTLE!

How to Play Super Mechs on PC,Laptop,Windows