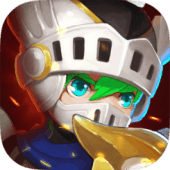 The average rating is 4.27 out of 5 stars on playstore.
If you want to know more about War of Angels: Four Heroes then you may visit 9GAME support center for more information

All the apps & games here are for home or personal use only. If any apk download infringes your copyright,
please contact us. War of Angels: Four Heroes is the property and trademark from the developer 9GAME.

Action-packed RPG – Join the tens of thousands of other players to embark on a thrilling adventure.

Become the legendary hero – Fight side by side with angels of light to help save the human race and win victory in the war of light vs dark!

★Fight Side by Side with Friends

Team up with your friends, join the guild & fight in thrilling guild battles

Choose out of 100 allies to train your own troops and manage your skills. Win battles with customized formations

Fight for the ultimate glory and become the strongest warrior

★Forge Your Own Weapons

Craft your own weapons and enhance them with inlay jewlery.Sell your spare weapons via auctions.

How to Play War of Angels: Four Heroes on PC,Laptop,Windows