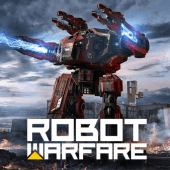 The average rating is 4.40 out of 5 stars on playstore.
If you want to know more about Robot Warfare: robot games then you may visit Azur Interactive Games Limited support center for more information

All the apps & games here are for home or personal use only. If any apk download infringes your copyright,
please contact us. Robot Warfare: robot games is the property and trademark from the developer Azur Interactive Games Limited.

Battle mechs are waiting for you – robots filled with modern weaponry. Can it be any cooler? Yes! Sudden attacks, fights and combats, creating your own strategy – all the robot war stuff is here to entertain you.

Get onward and become the best! Let yourself be furious and battle with robots!

High quality of graphics and optimisation for different devices
High speed and dynamic battles with free to win mechanics
Auto shooting and easy controls
Game locations inspired by real iconic places all around the world
Each robot is unique – choose your favorite to battle!
4 combat modes
Сreate your own game with its rules for your friends
Play online and offline – enjoy Robot Warfare: Battle Mechs even without Internet connection

Do you want to get the latest news and find teammates to play with?
Join an official community of Robot Warfare in VKontakte
https://vk.com/robotwarfare
or subscribe to our Facebook page
https://www.facebook.com/robotwarfare

How to Play Robot Warfare: robot games on PC,Laptop,Windows